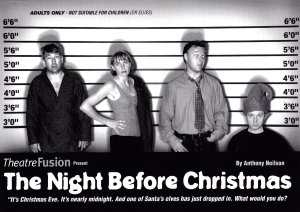 It is late on Christmas Eve. Gary has dragged his friend Simon out of bed to see a little something he has found in his warehouse. Simon can’t believe it… and Gary’s friend, the local call-girl Cherry, can’t quite believe it either.  It is an elf!  But is it a real elf or is it a burglar?

Leaping from one hilarious one-liner to another, they try to work out what to do next, not really noticing that elf is looking increasingly ill.

For all four of them, Christmas will never be the same again…

Adults Only – definitely not suitable for children (or elves)

A Scottish tour of a dangerously funny alternative to the pantomime, in what The Guardian has called “a wicked little comedy to warm the cockles of your heart”.

London-based Scottish writer Anthony Neilson’s 1995 play is a well-known and well-loved comic satire subtitled “a little something for the festive season”.

On the surface, The Night Before Christmas is a short, caustic, joke-packed little play that satirises the commercialism of the contemporary Christmas season.  The characters are laugh-out-loud funny in their criticism of the “elf” they discover.

Yet the elf awakens something in them – slowly they reveal a little warm-hearted yearning for some of the magic that Christmas held for them before the big nasty grown-up world stole it away.  Learn how the elves manage to deliver all those presents in one night.  Learn where the elves really live!  And learn the secret of that long lost magic “Christmas Feeling”!

Anthony Neilson’s plays have received a warm welcome in his native country this year, with productions of his acclaimed Stitching, The Censor, and the return of Dundee Rep’s highly successful production of The Night Before Christmas all happening within 6 weeks of each other.

“Brilliant!  Very impressed.”
“A funny, professional show.”
“A great alternative to the panto!”
“Terrific Entertainment!”
“My mum recommended the play to me, and it was f****** brilliant!”
“Good acting…  Very funny.”
“What a wonderful Christmas present!  Thank you!”
“Absolutely Brilliant – please come back again!”
“Highly recommended…  A very clever play.”
“Will recommend to my friends.”
“I don’t go to theatre often, but this was quite an experience!”
“A right good laugh!”

This touring production of The Night Before Christmas allows more of Scotland’s theatre goers the chance to see one of his most remembered plays, and completes TheatreFusion’s highly successful 2002 season in style.

Ten sell out performances in Glasgow alone – and praised warmly by audiences from each venue.